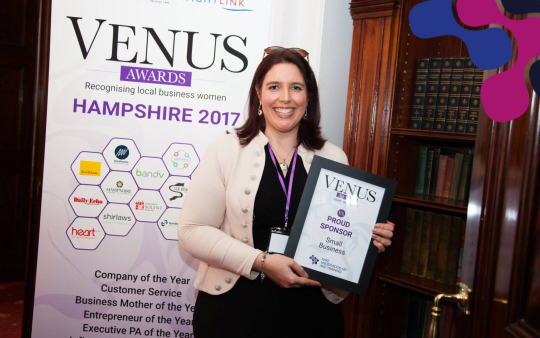 Last year I was honoured to be nominated for Southampton’s Venus Awards and managed to become one of the Semi-Finalists for Influential Woman and Finalist for New Business.

So now, as the competition brings Hampshire and the Isle of Wight together for the first time, it seemed only natural to continue my journey by sponsoring the Hampshire Venus Awards 2017.

I have been lucky enough to be given opportunities throughout my career. In addition to gaining all my HR experience, I have been party to the full business process and gained experience in a variety of business areas. I know I am no means an expert in all fields – that’s why I have a vast network of like-minded individuals who I regularly refer my clients to.

If you are looking to apply or you have been nominated for an award, my main advice is to spend time on your application and make sure the real you shines through. As a Sponsor and Judge, this year the first round to get to Semi-Finalists will be to just read through all the applications – we don’t get to meet any of you. Ergo, what you write is all we have to go on… so make it count!.

If you would like any help or advice with your application, please feel free to get in touch.

Along with Sponsors of this year’s Awards, the event was attended by over 100 guests from businesses and organisations across the length and breadth of the new super-size Venus region.

The Awards celebrate the vital contribution that women in business make to the local, regional, and national economy. In the new Venus region of Hampshire, nominees and applicants will be competing in up to 15 categories that include Company, Marketing and PR, Influential Woman, Employer, Customer Service, Business Mother, Executive PA, Director, Small Business, HR Manager, Employee, Entrepreneur, Musical Talent, Inspirational Woman, and Lifetime Achievement.

The Hampshire Venus Awards 2017 are unique in that anyone can nominate a friend, client or family member.

“We’ve been involved with the Venus Awards for a number of years as Associate Sponsor and once more as Sponsor of the Influential Woman of the Year. It’s safe to say from personal experience and from Peter Motor Group experience, and coming from an industry which is male-dominated, any time we’ve been lucky enough to have women in the organisation it’s been nothing but positive.”

“It is genuinely inspirational the role that women are taking in the local area, particularly those starting new businesses who are really breaking boundaries and setting new standards in what they do. I find that quite inspiring.”

“The benefits we get from the Awards are from being involved with businesses different from ours and the networking opportunities and insights it provides.”

Of their support and involvement as Associate Sponsor this year for the new, super-size Hampshire region, Jenny Aylward, PR Manager, Wightlink, says,

“We love the fact that the Venus awards really celebrate women in local business and that the innovative categories provide an opportunity to recognise so many unsung heroes. Wightlink’s experience of the Awards has been truly inspiring, and we have found networking with like-minded businesses to be very effective.”

When asked about the launch of the first Hampshire Venus Awards and their sponsorship of the Marketing and PR Award, Colin Breckenridge, Chairman of Southampton-based marketing agency bandv, says,

“We are pleased to be supporting the Awards for a second year running in the Marketing and PR category. I am looking forward to the Awards because one of the things I enjoy the most is visiting the nominees as it gives me the opportunity to understand their issues up close and discover what they have achieved in marketing and PR.”

The Southern Daily Echo is sponsoring the ever popular Business Mother of the Year Award that pays homage to the extraordinary role played by women not only in the workplace but as working mothers.

Charity sponsor for the inaugural Hampshire Venus Awards is Countess Mountbatten Hospice that serves people with life-limiting illnesses across a community in excess of 720,000 and a catchment spanning 460 square miles.

The Hampshire Venus Awards 2017 in association with Peter Cooper Motor Group and Wightlink will culminate in a glamorous Ceremony and Gala Dinner at The Spark, Southampton Solent University on Saturday, 11th November 2017.

Do you know a woman that deserves recognition? Nominate her now at https://www.venusawards.co.uk/hampshire/

Categories in the Hampshire Venus Awards 2017 in association with Peter Cooper Motor Group are:

HTEC Ltd Employer of the Year

MindWorks Marketing Director of the Year

Kate Underwood HR and Training Small Business of the Year

Employee of the Year

Entrepreneur of the Year

The Venus Awards were set up in Dorset in 2009 by Tara Howard to recognise the hard work, effort and skill it takes women to successfully juggle business with other commitments. The Awards have since been expanded to Southampton, Brighton, Devon, Oxford, Portsmouth, Birmingham, Isle of Wight and Bristol.