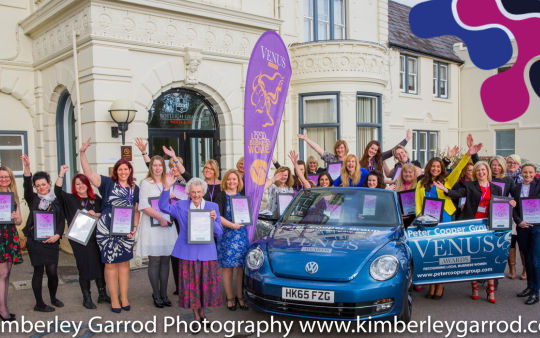 On Thursday 11th February 2016, Tara Howard, Founder of the Venus Awards, announced the Finalists of this years Southampton Venus Awards.

I am very honoured to have been included in the Top 3 and as a Finalist for the Rothmans New Business Award. The last seven months have gone like a whirlwind. Being nominated for a Venus Award was shock enough, but I never imagined I would ever be a finalist. I cannot thank Rothmans enough!

Now I just need to continue to grow… oh, and find a dress! The awards which will be held on the 15th April at the Ageas Hilton. I know which option will be harder!

It was more than tea for two at the Finalists Announcement of this year’s Southampton Venus Awards in association with Peter Cooper Motor Group at Botleigh Grange Hotel and Spa.

The Southampton Venus Awards, in association with Peter Cooper Motor Group, celebrated with sponsors, Semi-Finalists and over 70 guests the announcement of this year’s Finalists at an afternoon tea at Botleigh Grange Hotel and Spa on Thursday 11th February 2016.

Competition has been fierce in the region this year with 1,291 nominations and applications received in one or more of the 15 categories – two of which are voted for by the general public.

The Venus Awards in Southampton were launched in September 2015 and candidates have been whittled down to the Finalists stage through a combination of public and sponsored judging. Sponsors and candidates have attended a variety of events over five months to reach this point.

Associate Sponsor Peter Cooper Motor Group has continued their support of the Awards into a fourth consecutive year and is also sponsoring the Influential Woman of the Year category.

The Southern Daily Echo is sponsoring the ever-popular public vote category of Business Mother of the Year Award.

NatWest is this year’s sponsor of the Inspirational Woman Award and Mairead Taylor, Director, Corporate and Commercial Banking, said of their support of the Venus Awards,

“NatWest is delighted to be supporting the Venus Awards in recognising successful and inspirational businesswomen from our local communities. Events such as these are extremely important – not only in terms of celebrating great achievements but also in encouraging more and more women to enter the business world.”

“As a company, we continue to play an integral role in actively supporting women in businesses across the UK, providing dedicated relationship managers that work in partnership with customers as their companies develop and grow.”

Sandler Training is this year’s Sponsor of the Manager of the Year Award. Benjamin Dennehy, Motivational Sales Speaker and Sandler Trainer, said,

“The Finalists event was full of amazing women, great food, and plenty of energy. It was an overwhelmingly positive experience.”

Pam Bates, Fundraising and PR Manager for the Countess Mountbatten Hospice who are this year’s Charity Sponsor of the Southampton Venus Awards, said,

“As Lead Ambassador for Venus Awards Southampton, I am privileged to be part of the Venus family. There’s so much positivity and camaraderie between the Finalists that makes it something very special!”

The Venus journey will culminate in a glamorous Ceremony and Gala Dinner to be held at the Hilton at the Ageas Bowl on Friday 15th April 2016.

The Venus Awards Finalists, 2016 Are:

Dutton Gregory Business of the Year

BAT Entrepreneur of the Year

Rubicon Recruitment Employer of the Year

Heart FM Employee of the Year

SMART Small Business of the Year

Enhanced Director of the Year

Sandler Training Manager of the Year