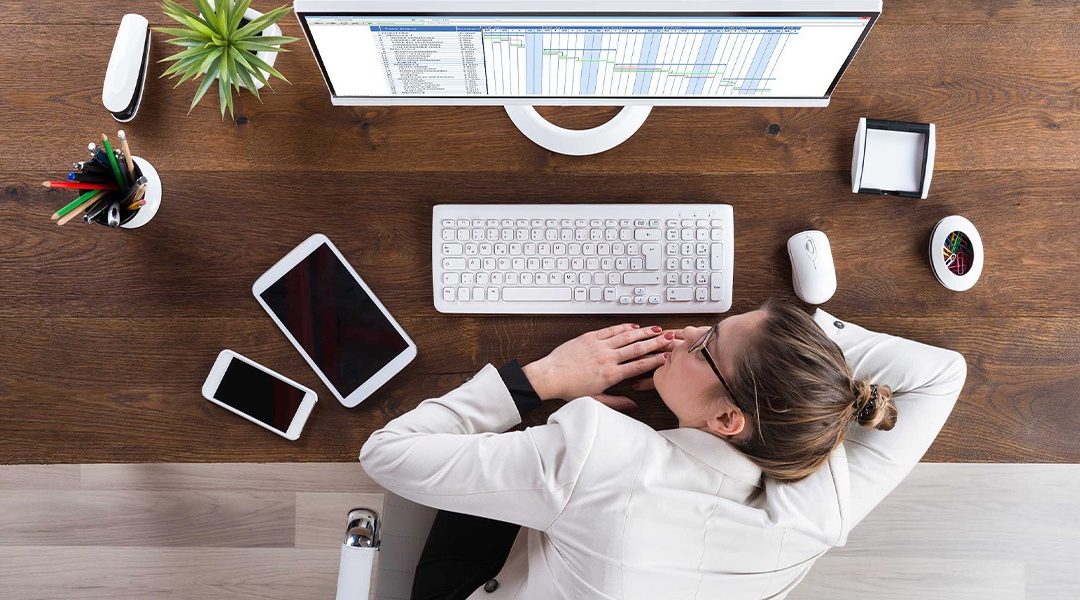 Happy New Year! We all made it through Christmas and New Year unscathed but now midwinter; the season of presenteeism is upon us.
Today, we’ll be learning what the term means and making a New Year’s resolution with six practical ways to reduce presenteeism in the workplace.

The term “presenteeism” was initially known as “sickness presence” and described employees coming into work while sick. Think of it as the opposite of absenteeism… though the term has now expanded to include two further definitions.

Presenteeism has also come to mean being present at one’s place of work for more hours than required, especially as a manifestation of insecurity about one’s job.

Last but not least, presenteeism refers to employees who have become disengaged from their role; those who… just aren’t present.

Whichever definition, and whatever the cause; physical sickness/mental wellbeing, disengagement, or staying at the office longer than required – the effects can be disastrous…

Though the term may be new, we’ve all borne witness to presenteeism.

We all know that one “trooper” who comes into the office when they should be at home curled up under a duvet. Their desk littered with Kleenex and Lemsip, they cough, splutter and complain while passive-aggressively letting everyone know what a martyr they’re being.

We’ve all seen that one person who’s lost their enjoyment in their role. They don’t want to be there and are going through the motions, collecting their paycheck.

And we’ve all seen the eager-beaver who “just has to finish this report” so stays late after everyone has gone home.

and may mean your company is in breach of the Working Time Regulations, 1998.

What Are The Effects Of Presenteeism?

The employee with the flu may well contaminate your whole workforce. The staff member who has lost their enjoyment in the role may lower morale. The employee who stays late may make bad decisions. All these examples can have knock-on effects of reduced productivity, but their presenteeism may be affecting your business in more ways than you can imagine.

It’s a fact that employees are much more ineffective when they are physically or mentally unwell or have lost the will to work. Their impaired performance and judgment could lead to mistakes, bad decisions and inefficiency, which cause financial loss, upset and bad feeling and cost time and money to fix.

The Research: Presenteeism Is On The Rise

Research shows that sickness presence isn’t going anywhere; in fact, it is raising its ugly head more and more. Deloitte reported in 2017 that presenteeism is costing UK businesses between £17-26 billion a year, and the cost of poor mental health in the workplace to be £33-£42 billion.

According to Statistics Canada, productivity loss due to presenteeism is 7.5 times greater than from absenteeism. I first wrote about presenteeism in 2018, and the recent Stevenson / Farmer Review of Mental Health and Employers noted that presenteeism is increasing year on year.

As an employer, you do your best to reduce presenteeism. Still, a report on absence management from the CIPD, who examine trends in absence, health and well-being in UK workplaces, found that a third of organisations have reported an increase in people coming to work while ill.

How To Reduce Presenteeism

Now you know what this phenomenon looks like, it’s time to rethink your beliefs so you can reduce presenteeism in your workplace. Sick employees are not troopers or martyrs for coming into work. They are liabilities who can spread illness, lower morale and make costly errors.

As an employer, you should pay close attention to your staff’s work activities so you can tackle and reduce presenteeism. It is essential to educate your managers so they can see the first signs of this pervasive behaviour early before it becomes a widespread part of your company’s culture.

Encourage Staff To Take Time Off

Employees get sick; it’s how you, as an employer, deal with it that counts. Making it clear that you and your company expect sick employees to stay home and recuperate will help reduce presenteeism. This applies equally to an employee’s mental wellbeing just as much as coughs and colds. You can also provide support to employees returning to work after illness.

If your company embraces long working hours, perhaps changing your philosophy will reduce presenteeism. Your employees will thank you for introducing a policy whereby everyone has to be out of the office by a specific time. A change to your working hours will make employees more efficient in the time they are in the office, increase employee engagement, help their mental wellbeing and reduce burnout. As a boss, you can help by making sure you don’t send out emails just before close of play.

Flexi-time and remote working and enforced lunch breaks will also improve your working relationship as they will be less likely to think of you as an Ebeneezer Scrooge-type boss! Thought those Dickensian Bah Humbug days were over? One in five Londoners are scared to take a lunch break!

If your staff don’t get paid while sick or if there are incentives for 100% attendance, you may actually be the cause of people coming in when sick.
Similarly, if you don’t have a robust enough Plan B, they may feel obligated to come in. Reviewing policies like temporary cover or secondment might help you reduce presenteeism.

Find Out Why Your Staff Are Disengaged

If a member of your staff is disengaged, take the time. They may have lost the will to work because they feel overworked, undervalued or just plain old bored and in need of a new challenge. Talk to them, listen, help them feel understood and offer solutions to re-engage them.

We have a number of techniques to help you get to the root of why your staff may be disengaged; from anonymous employee surveys to one-on-one training and e-learning so you can get the very best out of your team.

Implementing or improving a Wellbeing Programme which promotes healthy living, exercise, counselling and even managing personal finances can improve your workforce’s welfare and state of mind, prevent physical sickness and reduce the impact of existing conditions.

The healthier, happier, more looked-after, and motivated your team are, the more productive they will be, which means more profits for your business.

Here at Kate Underwood HR, we specialise in increasing employee’s productivity through wellbeing, employee engagement and training. If you’d like to reduce presenteeism within your company, please don’t hesitate to email me on [email protected], call us on 02382 025160 or book a call. We’re here to help you through the next decade.